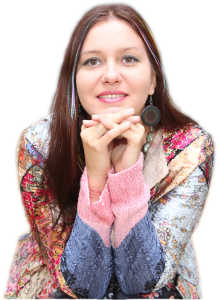 She is a multifaceted artist; her style could be described as going in two major directions: the 21st century Neo-Expressionism, and Spiritual Ornamental paintings drawn on symbolic folk art of various peoples, most notably on Russian and Indian mythology. Born in 1979 in Moscow, she graduated from an art school with honors and continued her studies at the Vasnetsov College of Fine Arts, Moscow. In 2007 she received her MFA from the I.E. Repin State Academy of Fine Arts, St. Petersburg, Russia. Her numerous awards include Gold Medal “250th anniversary of the Russian Academy of Arts,” Gold Medal “National Treasure” of the International Charity Fund “Philanthropists of the Century”, citation from the Russian Academy of Fine Arts for the participation in the exhibition dedicated to the 250th anniversary of the Academy, the Peacekeeper Fund Medal, and AVISKAR – 2016 international VAN GOGH AWARD, Birla Academy of Art & Culture, CALCUTTA-LONDON, UK, among others. She was nominated for the State Presidential Scholarship in the Arts. She is a member of the Union of Russian Artists, Art Fund International, Creative Union of Professional Artists, Art Indulge Foundation.

She has also had numerous personal exhibitions of her art all over Europe, India, China, and USA.

She lives and works in the New York City Metropolitan area.